Dick Cavett appeared in an off-Broadway play (Hellman V. McCarthy, in April 2014.) Below are some articles, interviews, and reviews about the play: 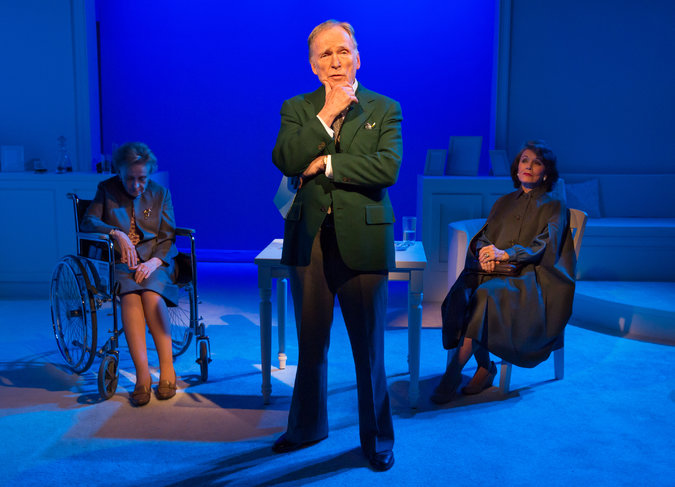 “It’s a little odd playing yourself,” Dick Cavett says, after doing so quite convincingly in the new play “Hellman v. McCarthy,” an Abingdon Theater Company production that opened on Wednesday at the June Havoc Theater. Mr. Cavett then jokes, “The funny thing is I was the second choice for the role.”

In fact, it’s hard to imagine this new play by Brian Richard Mori without Mr. Cavett’s astringently funny presence, which adds layers of charm and verisimilitude to a slender dramatic reconsideration of a famous literary feud.

Back in 1979, when “The Dick Cavett Show” was a frequent PBS pit stop for celebrities looking to promote their latest projects, or merely to keep a hold on a sliver of the public spotlight, Mr. Cavett invited the novelist and critic Mary McCarthy for a cozy chat that would ignite something of a literary furor when she was asked which writers she believed were overpraised.

Read the entire review in the New York Times.

McCarthy's instantly famous assertion about Hellman was uttered casually after a bit of hopeful prodding by Cavett on a January 1980 airing of his PBS show. Calling Hellman a dishonest writer, McCarthy further embellished with "Every word she writes is a lie, including 'and' and 'the.'"

In "Hellman v. McCarthy", which opened Wednesday night off-Broadway at the intimate Abgindon Theatre, playwright Brian Richard Mori creates a lively theatrical imagining of how the two women, especially Hellman, might have behaved behind the scenes while the libel lawsuit ran its course until Hellman's death in June 1984.

The host of “The Dick Cavett Show” — which aired on ABC from 1968 to 1975 and on public television from 1977 to 1982 — Dick Cavett is the author, most recently, of "Brief Encounters: Conversations, Magic Moments, and Assorted Hijinks” published in October 2014.

"During the late 60's and early 70's, The Dick Cavett Show was beloved by critics and hailed as an intelligent alternative to the other more frothy interview shows. In addition to the standard-fare of celebrities, he often booked controversial and opinionated guests like Gore Vidal, Timothy Leary and Georgia's segregationist governor Lester Maddox."

"The art of interviewing a personality particularly for television is probably the most difficult thing to achieve. Few people including the most experienced actually get it right. I think the reason is because being a good interviewer requires one to be first and foremost a good listener."

Some of Dick's Guests